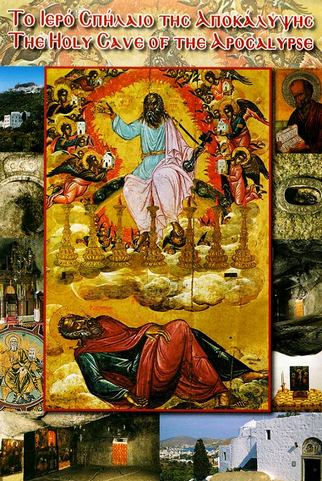 In 2009 I had a chance to make a pilgrimage to Patmos island. This Greek island is famous primarily for the fact that it was there that the apostle John the Theologian was given a Revelation (Apocalypse). 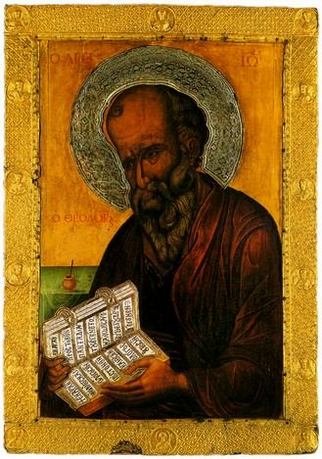 Evangelist John.
Icon in the vestibule of the kafolikon of the Patmos Monastery of St. John the Theologian.
Its original appearance dates back to the XII century, on top of a layer of painting of the XV century.

«The Revelation of Jesus Christ, which God gave unto him, to shew unto his servants things which must shortly come to pass; and he sent and signified it by his angel unto his servant John: who bare record of the word of God, and of the testimony of Jesus Christ, and of all things that he saw».
With these simple and at the same time inspired by God words, in which there is nothing superfluous, and therefore is essential, the book of the Apocalypse begins. This book is a prophetic, culminating example of eschatological philosophy, a book imbued with the Word of God. 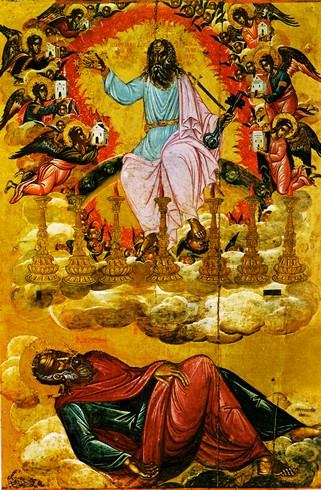 «I John, who also am your brother, and companion in tribulation, and in the kingdom and patience of Jesus Christ, was in the isle that is called Patmos, for the word of God, and for the testimony of Jesus Christ. I was in the Spirit on the Lord's day, and heard behind me a great voice, as of a trumpet, saying, I am Alpha and Omega, the first and the last: and, What thou seest, write in a book, and send it unto the seven churches which are in Asia; unto Ephesus, and unto Smyrna, and unto Pergamos, and unto Thyatira, and unto Sardis, and unto Philadelphia, and unto Laodicea».
Banished into exile, with the deepest faith in God, and the need for solitude and purpose, John found the only refuge in the miserable Cave of the then deserted Patmos. And here in the Holy Cave, he was a witness and honored of God's appearing and everything that was going to happen. 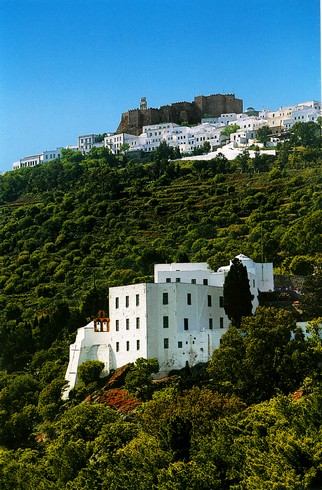 Monastery of St. John the Theologian in the Chora (above)
and the Monastery of the Apocalypse (bottom).
View from the port of Skala.

The Holy Cave is located approximately in the middle of the road that leads from Skala to Chora. Over the Cave in the middle ages was built the Monastery of the Apocalypse, as if covering it.
The construction of a monastery associated with the name of the Holy Christodoulos (1021-1093), which has been running the island of Patmos from the Constantinople Emperor Alexios I Komnenos, at the petition of Anne,mother of the Emperor. 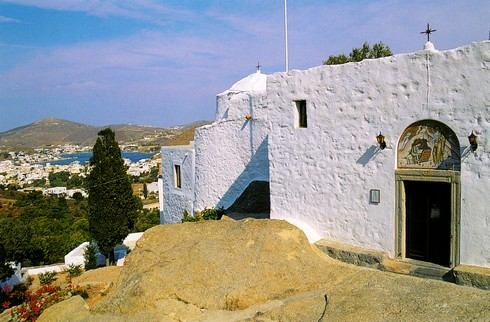 The entrance to the monastery of the Apocalypse.

Starting down to the Holy Cave, first you need to cross the courtyard. After a few steps on the right side is the chapel of St. Artemius, dating back to the XVIII century.
Continuing down, the staircase leads to the terrace, where you can see on the right: dome of the nave, the dome of the Church of St. Anne and the bell tower.
Going down the remaining steps, we find ourselves in front of the entrance to the temples of St. Anne and the Holy Cave, located in the same room and separated by a stone vault. 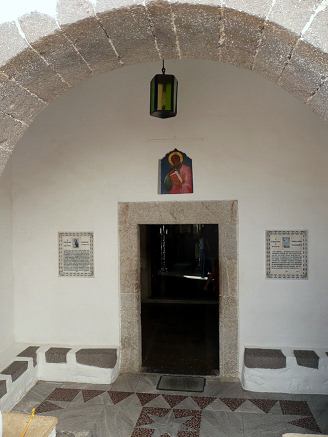 The entrance to the Cave of the Apocalypse.

The inscription at the entrance to the Cave fills with awe and excitement:

«This place, which makes an indelible impression, is the house of God and the Gates of Heaven»

Traversed the door, we find ourselves first in the Church of St. Anne, built by Christodoulos in honor of the mother of the Virgin, and in honour of Anna Dalassena, mother of Emperor Alexios I Komnenos. 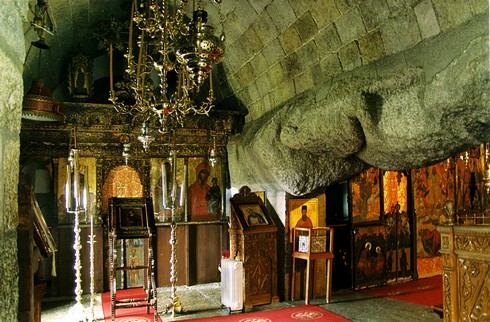 Inside the Monastery.
On the left - St. Anne's temple,
on the right - Temple of the Cave of the Apocalypse.

To the right of St. Anne's temple is a Temple of the Holy Cave. Between them hangs a part of the rock, which has a triple cleft, which can be reached by hand. According to legend, this crevice was formed by the action of the Holy spirit during the announcement of the lines of Revelation «…and, lo, there was a great earthquake; and the sun became black as sackcloth of hair, and the moon became as blood» (Rev 6:12), and this among believers is considered a symbol of the Holy Trinity. 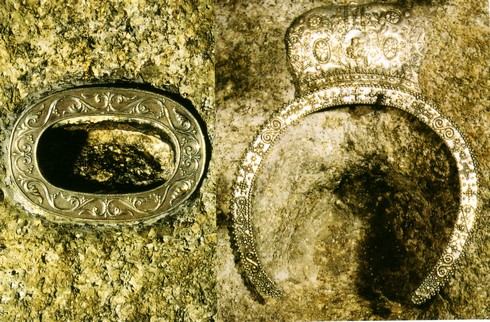 Recesses in the rock, where according to legend John the Theologian
leaned his head (right) and hand (left).

In the corner of the cave surrounded by a gilded fence a small recess in the rock. Here Saint John slept, laying his head in this recess.
A little further away outside the fence – very small oval hole in the wall, framed in silver. Here the Apostle rested his palm, rising from his bed. At this time he was already well stricken in years. At the height of human growth is a natural analogion on which Prokhor, a disciple of John, wrote down everything that the teacher dictated to him. 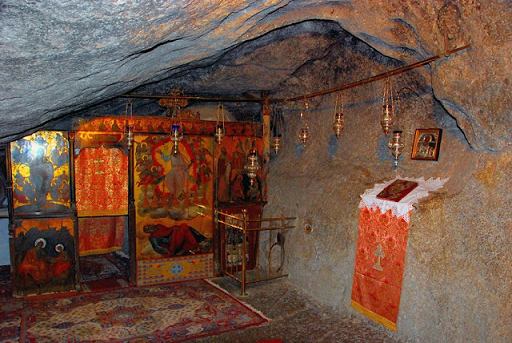 The altar of Cave of the Apocalypse. 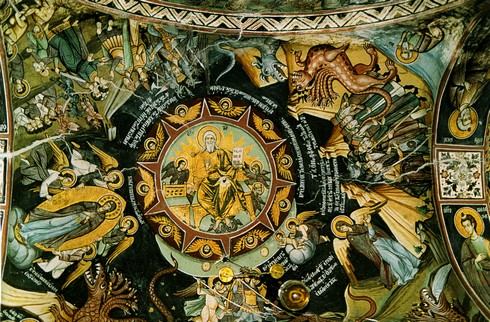 God the Father. Painting in the Monastery of John the theologian based on the Apocalypse, XIII century.

I tell you more about my pilgrimage to Patmos in the book «Apocalypse. Interpretation of the XXI century».