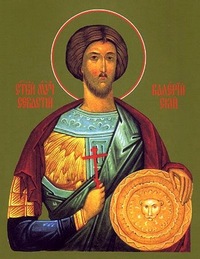 Valeriy Sterkh is the author of more than a dozen books published in Russian and English, specializes in intellectual Christian literature in the style of "just about complicated". Graduated with honors from Ural Federal University (UrFU). He is owner website of religious books sterx.ru, maintains a blog v-sterh.livejournal.com and page vk.com/valery.sterh, participant of the Moscow international book fair.

Since the 1990s, he has been studying philosophy and theology in depth, as a result of which he came to the Christian faith. He was baptized in 2000 in the Russian Orthodox Church.

The writer's works on religious theme are authoritative sources of references in the Russian and English Wikipedia, as well as in the international scientific social network Academia.edu.

I was born and raised in Russia, in the Ural region. In 1990s I thought of writing a book on John's Revelation (The Apocalypse). After dedicating a few years to this research, I found my Christian faith. In 2000 I was baptized in the Russian Orthodox Church. After that I started working on the book. In 2009 I went on a pilgrimage to the island of Patmos, where John the Apostle received his Revelation. This journey was a great encouragement to me, so I decided to complete my work of interpretation of the Apocalypse. In 2011 I went on a pilgrimage to Jerusalem. I am an author of several books on various Christian topics.